Surfers Paradise Baseball Club fields three senior teams each summer season in the top league of Queensland: the Greater Brisbane League (GBL).  The season runs from September to March, with sign-ons starting in early August.  New players are most welcome.  To enquire further, please send a message through our Contact page.

For all GBL Seniors team and individual stats, including historical records for Major A, please go to the Stats section. 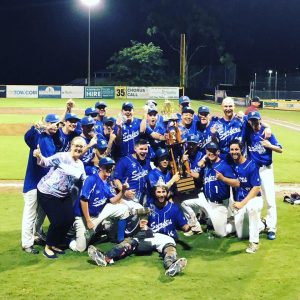 The Surfers Paradise Baseball Club entered the Greater Brisbane Major League in the 2002/03 summer season and promptly stamped their mark as one of the top clubs in the league.

The team took out last years 2017/18 Division 1 Queensland Major Baseball League Premiership for the 6th time, defeating the heavy-hitting Windsor Royals 2 games to 1 in the best of three series to cap off a great season.

With experienced veterans and promising young guns, the Surfers Paradise Bluewave are a formidable force to be reckoned with.